Posted by aggrodude on July 13, 2012
Posted in: Canada, family, Pain. Leave a comment

Today was an amazing day in Northern France! We began by eating a fantastic breakfast at the hotel (included with price!) and then headed to Arras’ Hero Square. Driving in town is exciting: narrow streets and plenty of aggressive pedestrians. Walking through town was particularly hard on Pierson and Jack, who witnessed a jaywalking pigeon get run over, guts and brains smearing on the cobblestones. Pierson had just commented on how it was amazing pigeons never got hit!

We then headed out north to Vimy. The lane off of the highway is meticulously groomed, large trees flank the drive and shade the lane. It winds through green, shell-cratered fields that are kept down by brave little flocks of sheep. The first stop was to the Vimy memorial, an incredible piece of architecture, and a must-see for Canadians when in France. Beautiful statues honour all of the unknown Canadian soldiers who died in combat in France during WWI. An astounding 11,000! 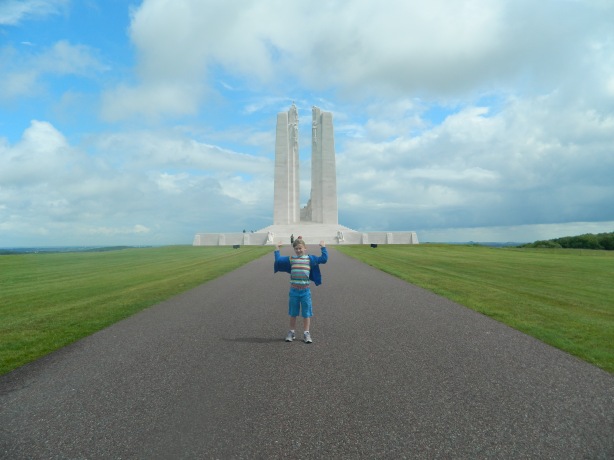 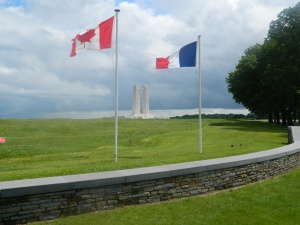 Then it was to the Interpretive centre where good old Canadian kids act as interpreters, take visitors on tours of the trenches and tunnels that wind throughout the grounds. 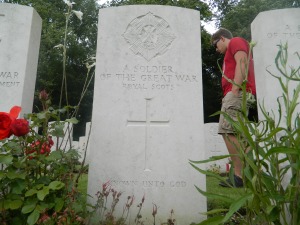 The family then jumped back in the van for a trip back into Arras where we went 12 metres underground into the Boves, tunnels created in the 11 century when the French were busy mining chalk. The incredible labyrinth left are used as discos, bars, cellars, and for tourists. The same tour then led us up the belfry (no bats) for an excellent view of the square and surrounding town. 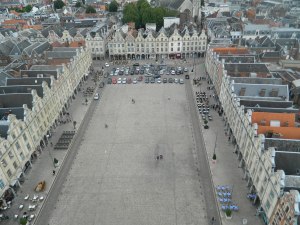 We also had time to step into the church of St. John the Baptiste, it’s inspiring gothic arches and vaulted ceilings adorned with wonderful stained glass and a huge copy of what Chris is pretty sure is a Renoir (maybe a copy?).

The day was capped off with a late supper, and the whole family went down early for bed. Another amazing day awaits tomorrow.

Huge highlights included meeting Canadian families at the Vimy memorial, and sharing in their admiration and appreciation for what past generations of soldiers have done for France and Canada, and also being excited in each other’s travel plans. 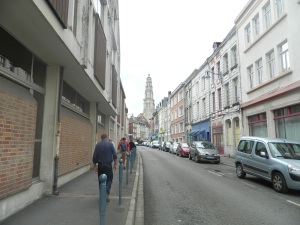 The surprise of the day came in a Canadian cemetery near the Vimy memorial that had a small plaque leaning against a head stone that was donated by Lindsay Thurber students in 2001. Wow! 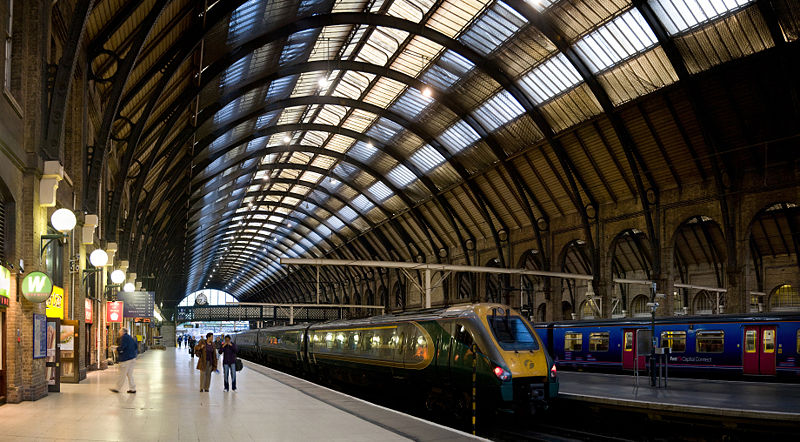 It wasn’t that long ago that I last blogged from the Calgary Airport. To be honest I’m not sure how many hours ago it was. We thought we were getting the great bargain by taking the late afternoon flight from Calgary direct to London. Summer is a weird time to fly, especially east, as you speed towards morning, and with the parabola over Greenland, you never actually see darkness. Everyone had their shades drawn, and our kids would open them to see what was going on down below, a blinding spotlight would pierce through the plane.

While neck pillows do help stabilize the head in flight, it’s tough to tell your body to sleep when it’s only 9:00 pm local time, so most of the family watched movies (In Time with Justin Timberlake isn’t all bad) or read – none slept.

It was incredible to land at Gatwick, the picturesque puzzle-pieced farmland bordered by cute hedges and stone walls, and we all high-fived on our Commonwealth common ground. After getting the worst possible border/customs agent (grumpy that we didn’t hand all six passports in together) we still felt welcome in England. The goal was to make it to Paris, where we’d pick up our rental van. Good idea? In theory. We jumped on a train, and headed into London. After missing our transfer to King’s Cross, we got off at Victoria station (after taking up 14 seats with our giant amount of luggage) and bought tickets for the Underground which took us to King’s Cross/St. Pancras station, where we thought we’d pick up cheap train tix to Paris. Not cheap. VERY expensive. But a high speed train through the Chunnel is kind of cool. Kids had a good little lunch and Spencer slept for 2 and a half hours.

We came to a stop in northern Paris at Gare du Nord station, where our rental van was waiting…

After a well-deserved bathroom break, we headed to the rental pick-up. Unfortunately it was roped off, and surrounded by dozens of police, soldiers, firemen and even a couple of sniffer dogs. Through broken French and overheard conversations, we pieced together that two vehicles had completely burned up (whether intentional or accidental is still open to debate and police investigation). The parkades had to be ventilated, water mopped up and things sniffed.

After three and a half hours, we were finally able to claim our van – making an already long day very much longer. Chris proceeded to stall the standard nine passenger Mercedes in the parcade on the slight uphill leading out to the busy Paris streets, but quickly got the hang of it. Driving in Paris was at times very slow, at times very fast, and always bumper to bumper. Thankfully, the rental dude gave very good instructions on evacuating the city, and the whole clan made it to Arras for the night.

We are currently holed up in two cute little rooms in the Holiday Inn. Not surprisingly, a hot shower felt incredible, and there isn’t even need for air-conditioning, as it was only 15 degrees with rain. For their first official European meal, the Kooman/Siebengas chose…McDonald’s!

Brutal but true. It was late and honestly the only thing open.

We are incredibly grateful to be here, and will begin our first ‘holiday’ day exploring the battle sites that Canadians contributed to in WWI tomorrow. Arras looks like a quaint little city, but it’s still dark.

So I did a potentially silly thing the other day. I agreed to ride 70 Km on a Saturday around a lake. It sounded like a good idea at the time, but the subsequent bike rides I’ve taken have really done a number on my heiny. So, the plan is to ride a bit everyday, and hope that by October 1, I’ll have some callouses to protect me.

The reason I’m doing it is to support the Ride for Refuge, an organization that helps the cause of people who are marginalized, displaced and needing support. In addition, I’m able to partner with Burnt Thicket Theatre and Raise Their Voice, two organizations that do great work, and are currently raising moolah to put Andrew Kooman’s play She Has a Name in theatres across North America.

Great idea? Well, my body might argue with that one on October 2. Great cause? You bet! If you’d like to sponsor me, check out my page at Ride For Refuge. Every little bit helps!

It’s hard to believe that at the end of April, the skiing is still amazing in Alberta. 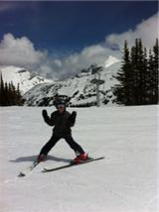 I took my kids to Sunshine on Easter Monday. They’ve had one of their best years for snow ever! The base is amazing, and the crowds were non-existent. No line-ups on any lifts, 2 degrees above zero and sunny! A great day to get my littlest out on the slopes!

From what I saw tonight of Vancouver’s opening ceremonies, I was proud to be a Canadian! An amazing combination of lights, Canadiana, and a dash of Donald Sutherland’s smooth stylings helped. k.d. Lang’s rendition of Hallelujah was absolutely fantastic, and even Nelly Furtado couldn’t ruin the night.

My dad and I have been talking about who would light the Olympic torch for about a month. We settled on four possibilities: Nancy Greene, Wayne Gretzky, Steve Nash and Rick Hansen. Who knew they’d ALL be lighting the torch!? Awesome! Too bad Catriona couldn’t get hers up. If only Cialis was an Olympic sponsor.

A great night, and one that Canadians can be proud of.