The 10 Best R-Rated Action Movies of All Time

I thought it was time to try another top ten. I like top tens – reading them and writing them – but I want to try to keep a fresh outlook on them. I thought I’d try my favourite R-rated action films. This rules out movies like Pirates, LOTR, most superhero movies, etc, which are targeted to kids, teens and families. These movies are not. They are probably targeted at the 16-20 year old crowd, which is when I saw many of these, but they’re movies that I still like.

To be eligible, the movies should contain mostly action, include good special effects and have an R-rating. (Usually due to violence – and sometimes language). On to the list!

Starring Bruce Willis as detective John McClane, this movie was released in 1988. It has terrorists, explosions, and a full building full of people that McClane has to mow his way through.

Sylvester Stallone and Wesley Snipes star in this futuristic action thriller with Sly as a tough cop sent to the nerdified future to catch an incredibly over the top Wesley Snipes. Sandra Bullock appears in one of her first memorable roles, and Dennis Leary plays Edgar Friendly – an underground (literally) criminal who wants earth to return to the way it was. One of Edgar’s memorable quotes:

Edgar Friendly: You see, according to Cocteau’s plan I’m the enemy, ’cause I like to think; I like to read. I’m into freedom of speech and freedom of choice. I’m the kind of guy likes to sit in a greasy spoon and wonder – “Gee, should I have the T-bone steak or the jumbo rack of barbecued ribs with the side order of gravy fries?” I WANT high cholesterol. I wanna eat bacon and butter and BUCKETS of cheese, okay? I want to smoke Cuban cigar the size of Cincinnati in the non-smoking section. I want to run through the streets naked with green jello all over my body reading playboy magazine. Why? Because I suddenly might feel the need to, okay, pal? I’ve SEEN the future. Do you know what it is? It’s a 47-year-old virgin sitting around in his beige pajamas, drinking a banana-broccoli shake, singing “I’m an Oscar Meyer Wiener”.

We don’t want that Sly, do what you can to stop it!

Based loosely on a novel by Stephen King, The Running Man is the story of Ben Richards (Arnie) who is wrongly convicted of killing innocent people in Bakersfield, California. It is the future, and convicted felons are sent to battle it out in an earthquake ravaged section of Los Angeles against a group of hulking WWE wrestler types with fancy weapons. Of course Ben is the answer to the scourge of such headstrong enemies like Buzzsaw and Shocker. Jesse Ventura makes an appearance as well.

Cool effects include neck collars that blow up when a convict attempts to escape, and a wicked x-ray machine in the local airport.

The movie really deals with tough issues like government propaganda, the use of media to dupe the public, and the potential horrors of reality TV (although we may have reached the peak with American Idol). Who am I trying to kid, the movie is about action.

No guards. No walls. No escape.

With a stellar cast that includes Kevin Dillon, Ray Liotta, and the unstoppable Ernie Hudson – OK so the actors totally suck. I have to be honest the story isn’t that great either. Liotta’s character is convicted of killing his commanding officer, and is sent to prison on an island – a prison you can only leave when you die! Sound crappy? Funny enough, I loved it. If I ever did a top 10 movies I should have hated but liked (kind of the opposite of this one) this would be on there for sure.

It is a bad story, has bad acting and I haven’t seen it since I was about 19, but I really enjoyed this. Lots of action, and basically a good story about one wrongly convicted prisoner who has all the odds against him and makes it out OK.

Vampire movies have always fascinated me for some reason, and this one ratchets the action/grisly death thing up a few notches. Wesley Snipes  is Blade, the ‘Daywalker’ – a half man half vampire – who protects humans from the reams of vampires that live in and among us. They are rich, powerful and feed off of humans, so this is a concern. Blade is a capable warrior with cool weapons and a good sidekick – Whistler – played by Kris Kristofferson.

Gabe Walker (Stallone) is an expert climber. He feels responsible for the loss of his best friend’s fiance/girlfriend, in a freak climbing accident. Years later, he still blames himself and doesn’t want to go back to the mountain.

A government transfer plane goes down in the mountains with a huge sum of cash that is being transported over the mountains for some forgettable reason. Hostages have been taken, and Stallone needs to go back to the mountain to rescue his old friends.

Apparently the most expensive aerial stunt in the history of Hollywood happens in the film when an aerial transfer happens between two planes. The stunt man was paid over 1 million dollars for the trick, and it and other stunts and effects are pretty seamless. Remember this (and other movies on this list) was filmed nearly 15 years ago, before CGI, but the film still looks great.

The Game is a 1997 psychological thriller film directed by David Fincher and produced by Polygram that tells the story of a wealthy businessman who is gifted with prepaid access to a game that integrates in strange ways with his life. As the lines between the businessman’s real life and the game become more and more uncertain there are hints of a larger conspiracy.

It stars Michael Douglas, and is really worth watching!

They stole his mind. Now he wants it back.

Imagine being able to go on a vacation, without ever leaving a chair. Apparently in the future, you can inject youself with a virtual holiday, including all the pain of getting there.

This is the situation Arnold (yeah, him again – and two more times to come in the list too) finds himself in. He takes a virtual holiday to Mars, and then finds out he’s actually a secret agent with incredible abilities and high-powered friends.

The whole movie’s premise plays on the idea that you don’t know if what you’re watching is real or made up in the main character’s mind. It even ends with the viewer not knowing the real answer to what may or may not have happened.

If you like mutants, three-breasted women and weird technology, this is the show for you.

Most amazing scene: Arnold pulls a large tracking device out of his brain through his nose with a metallic pincer. Gross!

This is almost a perfect action movie. It has a super hero, an incredible villain, cutting-edge special effects, and a huge budget to blow things up, crash vehicles and break windows. Arnie is a super strong robot out this time to save the real hero of the story — John Connor (a human who will lead humans in a final battle of resistance against evil robots in the future), from the evil new t-1000, a liquid metal robot that can do just about anything, including taking the form of anything it touches. It was Arnie as a bad robot in part 1 that was really quite something. Now he’s back as the good guy.

Despite the fact that he’s not a really good actor, Arnold does have the ability to mix corny one line humour with incredible action sequences. 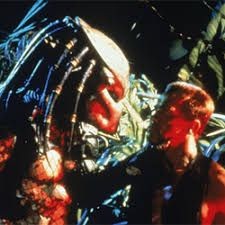 Not the only movie on this list nominated for an Oscar (best visual effects), Predator is the story of a group of elite commandos in the Costa Rican jungle (doing something that nobody remembers anymore) but are eventually hunted by one kick-butt alien. This thing is one mean son-of-a-you-know-what and rips through the commandos like a hot knife through butter.

Standing in the way of total destruction is Earth’s hero Dutch (played by the gubernator – Arnold Schwarzenegger). This is his greatest role and includes the horribly good line “If it bleeds…we can kill it”. How can you resist?

Also starring Carl Weathers (Apollo Creed from Rocky fame, who gets his arm blown off), Jessie (the body) Ventura (who ends up with a huge hole through his chest), and a sweet Mexican tracker named Billy who meets a particularly greusome end (and incidentally who later ran for congress). Sound gross? It is. But in a way, its very cool too. I don’t normally go for just violence, but this movie rocks.

So as you can see, I seem to love Arnie and Sly’s pretty high on my list too. I hate the slasher/horror genre, but the sci-fi, action movies are my favourites. I haven’t seen a good new one for a long time. I heard Alien vs. Predator 2 comes out this winter. I’ve got my fingers crossed.