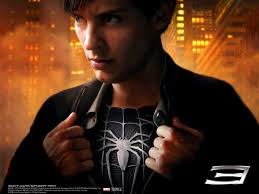 Well, he’s back. This time he came along with some friends, and a whole lot of enemies. As we already know, Spider-man 3 broke all of the box office records for its opening weekend. It doesn’t have any real competition until Shrek 3 comes out in a couple of weeks, so it will probably earn tonnes more.

I ended up taking 2 of my kids and our cousin. They are aged 9, 12 and 13 and they loved it. The theatre was packed, and people were pumped about the movie. There was cheering, laughter and applause. It was a good experience.

The movie itself was OK. I thought there were too many story lines happening at once. Sandman, Venom and Harry as mini-goblin could have all had films of their own. There will be other movies I’m sure, and one wonders where the villians will keep coming from.

Tobey is great as Spider-Man. He makes for a nerdy Peter Parker which is perfect. Even his ‘darker’ stint as Spidey/Venom, is goofy, funny and entertaining. He probably could have played it a little darker, but the movie is geared towards kids after all.

The biggest criticism this movie seems to be facing is that it’s too over-the-top, too cartoonish, and not dark or serious enough. See a proble here? This is a blockbuster movie based on a comic book, made to earn big bucks. Last night I watched Roeper give it a thumbs down. He liked the action and set pieces but found it didn’t live up to the first two.

I disagree. If you’ve seen parts 1 and 2 and liked them, you’ll like this one. It’s fast, exciting and very entertaining.